If you’re into documentaries I’ll encourage you to check out Iron Cowboy on Netflix. It’s an incredible story of an Ironman competitor who breaks the world record for most ironman in one year with 30 in 11 countries in 2012. He set the record on accident and of course, like most driven competitors, that wasn’t enough.

Just for context. That’s 2.4 miles of swimming, 112 miles of cycling and a full 26.2-mile marathon run every day for 50 days straight. And he did all of this while traveling in an RV with his family sleeping on average of 4.5 hours a nigh.

When you do good people will accuse you of ulterior motives…

But unfortunately, my biggest takeaway from this remarkable feat was when people actually TURNED on him less than halfway through because he was taking IV’s and one day instead of running outside or on the treadmill he ran on an elliptical. The social media page became flooded with negativity from people trying to diminish his incredible feat and resilience.

Oh, and did I mention, he was doing all of this to raise money for charity?

When it’s easy to go negative we have to remain positive.

James almost let this negativity derail what he set out to do when he had a breakdown. But sometimes it takes a breakdown to have a BREAKTHROUGH. He was able to rebound QUICKLY and refocus on WHY he’s doing what he’s doing.

Be Transformational in a Transactional World

James almost let the negativity of social media and “haters” stop him from achieving one of, if not the most, amazing physical feats ever. Instead of focusing on the people he was inspiring he let the negative noise impact him, understandably.

Sometimes we must have a breakdown to have a breakthrough. Your WHY and your SUPPORT group is vital to your success (share it with people and don’t allow haters to remain around your inner-circle)

So in the end. I’ll leave you with Mother Teresa’s poem “Do Good Anyways.” 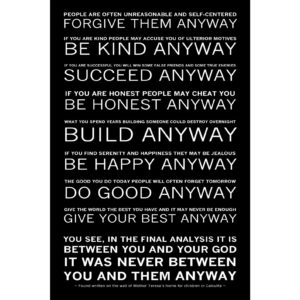